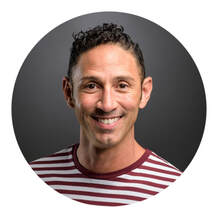 Mr. Claudio is the Outreach Director, Co-founder and COO of Minding Motion for Graceful Aging and the Founder and Co-director of GREY MATTERS: Dance for Parkinson’s- Utah, the first program of its kind in the State. He has been teaching dance and creative movement to all ages for over twenty years. Juan Carlos obtained his Master of Fine Arts degree from the University of Utah, Department of Modern Dance where he also later held the position of Assistant Professor from 2009-2016.
​
He holds a Creative Arts and Aging Teaching Artist Certification from the National Center for Creative Aging, First Aid/CPR/AED Certification from the American Red Cross and The Basics from the Alzheimer’s Association which include: Memory Loss, Dementia and Alzheimer’s Disease, Effective Communication Strategies and Understanding and Responding to Dementia Related Behavior. He is completing his Dance for PD® certification from the Mark Morris Dance Group in New York and the AFAA Golden Hearts®: Senior Fitness Certification.
Some of his teaching accolades are the Generous Heart Award from DanceStudioLife Magazine (Rhee Gold Company), the Innovation in General Education Award from the Office of Undergraduate Studies, the Excellence in Global Education Award from the Office of Global Engagement and the Dee Winterton Award for excellence in teaching and mentoring at the University of Utah. He has also received several University grants through the Professor Off Campus Initiative from the Lowell Bennion Community Service Center, and the Public Service Professorship from the Tanner Center for Humanities to work on issues of empowerment and cultural diversity through dance at public school in the Salt Lake District. Juan Carlos worked with Utah Art Access in The Dreamer’s Project working with immigrants of color and the Iraqi Leadership Exchange Program (YLEP) from the Utah Department of State. His community engaged practices have been featured in Dance Magazine, DanceSTUDIOLife magazine, STUDIO magazine, Ballet magazine, Deseret News, Salt Lake Tribune and local TV stations on subjects of community service, social justice, and volunteerism through dance.
From 1996-2006, Juan Carlos danced as a full time company of Ririe-Woodbury Dance Company. During his 10 years with the company he traveled the world performing original works of major national and international choreographers as well as conducting teaching residencies with diverse populations. Inscribed by his mentors, Joan Woodbury and Shirley Ririe, he is also a firm believer that “Dance is for Everybody” and he believes that it is essential to the development of the individual as a whole.